Jack has always known what he wants. :) 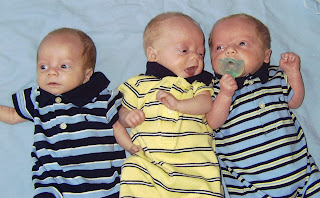 Well, that could have gone better....

Last Sunday was the Cub Scout Cake Bake.  We were busy Friday night and all day Saturday so, that left us Sunday, until 3:00, to get 3 cakes made and decorated.  As soon as we got up, we got busy making cakes.  I figured if we got them all baked before church, that would leave plenty of time in the afternoon to get them decorated.  It was going very well.  The first cake was in the oven, the batter for the 2nd cake was ready to go and the boys were sitting at the counter eating breakfast.
Someone needed a knife so, I quickly opened the silverware drawer to get the knife.  Unfortunately, the cord of the portable mixer was caught on the drawer.  The mixer was still in the batter bowl.  When I flung open the drawer, the full batter bowl flew off the counter, somersaulted, fell to the floor and bounced.  It was a disaster. 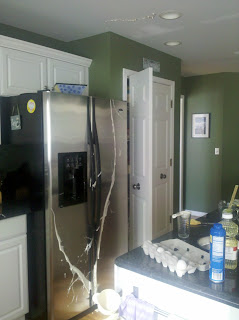 Look closely at the ceiling.  See the big splotch of batter on the ceiling?  This picture does not even come close to showing what a mess it was.  Batter was literally dripping from the ceiling.  Yuck!

In spite of the "disaster", we did manage to pull off 3 cakes...barely.  I think my kitchen may be permanently gritty, but the cakes got made. 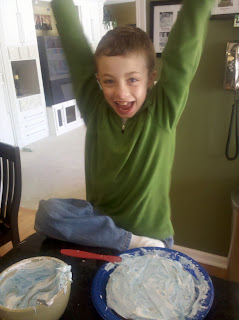 Ben couldn't even go to the "Cake Bake" this year because he had a soccer conflict.  I think he decided that he wanted to participate just so he could play with frosting and eat more cake.  He made a cake of his favorite word...Neb.  He's such a dork, but had a great time designing his own cake and his friends got a good chuckle out of it. 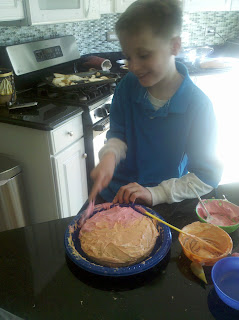 Jack, on the other hand, had a real plan.  He wanted a Rubik's Cube cake.  He took it very seriously and even left a shopping list for me Friday morning.  He had it all planned out...."orange frosting, yellow frosting, blue frosting, red frosting, green frosting, white frosting, black frosting and lots of baking soda".  Unfortunately for him, his mother is soooo not a baker that I had to ask him why he needed lots of baking soda.  He informed me that it is baking soda that makes the cake bigger.  Who knew?!?! 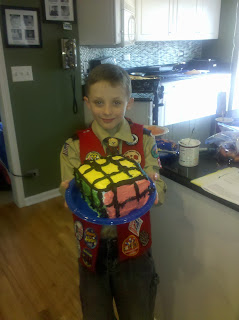 I know that Jack was very proud of his cake even though he titled it "A Messed Up Rubik's Cube".
Better luck next year....for all of us!

We have the most interesting conversations in the car.  Here is our Sunday morning conversation that we had this morning on the way home from church.  Just for the record, this had nothing to do with anything that was mentioned in church today.

Jack:  "Hey Mom, did you know that same-sex marriage is allowed in 8 states?"

Jack:  "I think I heard it on the news, Massachusetts was number 8."

Since this topic hadn't really come up before, I asked them if they knew what same-sex marriage was.  Ben, Jack and Drew told me that they did.  Then I told them about how even thought it is legal in 8 states, our Church does not perform same-sex marriages and we talked a bit about that.  At which point, Drew jumps into the conversation with two feet....

Drew:  "Well, if I ever *ACCIDENTALLY* ended up in a same-sex marriage, I sure hope that I wouldn't have to be the BRIDE!"

We then continued the conversation and talked about whatever our feelings are about same-sex marriages, it is not a reason to dislike people that make a different choice or to make them feel bad, and everyone is entitled to make their own decisions.

Ben then said:  "It is like an OPINION!  Everyone can have an opinion and they can all be different and that is ok."

And, finally, Charlie, who has been quiet through this whole conversation, contributed...

Charlie:  "Just like we don't hate people that don't have red, and blue, and green and yellow as their favorite colors.  Because my OPINION is that those are MY favorite colors."

Spencer and I took ONE kid to dinner last night.  How weird is that?!?! 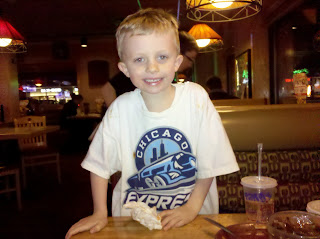 I honestly don't think that I've been out to a dinner where the adults outnumber the kids in almost 10 years, when Ben was minus 4 weeks old and we took him to Olive Garden.  Jack and Drew were still in the NICU. 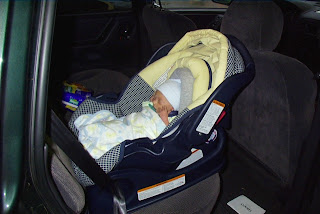 The only minor problem that he had was that he only got 1 crayon instead of the 4 different crayons that they all usually share.  I guess having a bunch brothers has advantages that we haven't even thought of.  He was like....how am I supposed to color this picture with only ONE crayon?!  I did ask Charlie if he missed his brothers or liked being the only kid at dinner.  He said "Yeah, I miss Ben, Jack and Drew.  I miss Drew the most because he is the littlest brother I have." 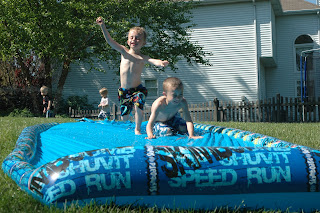 I think he missed Drew for other reasons.

Life According to Jack...

This was a quick school assignment that Jack wrote.  I thought it was cute and very well written for something that he just threw together. 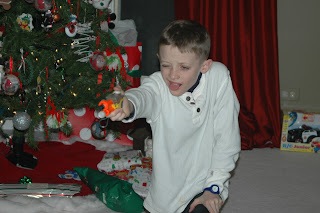 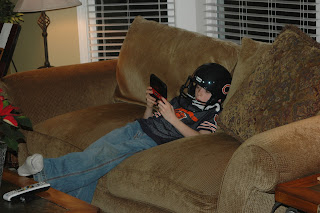 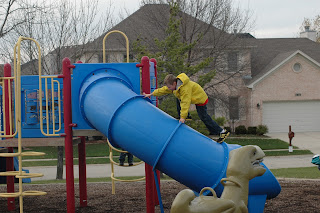 P.S.  I do realize that this was a completely silly and random thing to blog about after not blogging for a couple of months, but hey, it's my blog.  Let's see if it get's me going again...

Ben, Jack, Drew and I went to the planetarium tonight with Cub Scouts.  I always like the planetarium and the planetarium lady did an excellent job presenting to the kids.  The boys all seemed to be very interested and enjoyed the presentation.
When we got home, Ben and Jack took out their binoculars and using the sky map that they received from the planetarium, they went out to find the stars. 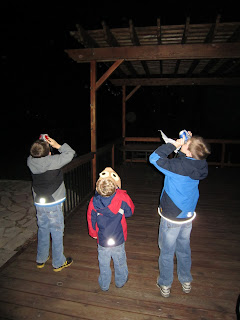 Charlie never likes to be left out so, he gathered the equipment that he deemed necessary for star gazing...his Cars sun glasses and owl hat.  Then he set out to join his brothers. 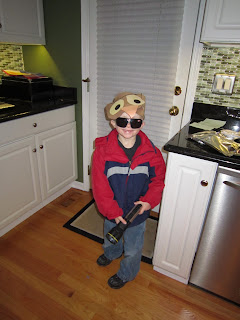 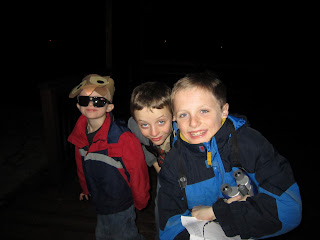 Ben and Jack seemed to do pretty well using what they learned.  According to them, they saw the big dipper, the north star, Jupiter, and several other less known constellations that they were able to find on their sky map.  It was 35 degrees and super windy so, I took their word for it.  Charlie took notes about what they found. 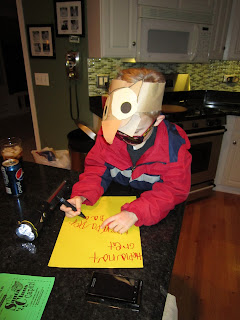 "The planat" (the planet)
"great "
"Drewpader" (this one cracked me up...he meant Jupiter, but it was hilarious when he was running around the house all excited about Drew-Pa-Der.  Drew thought it was pretty funny too.)
Then he continued with the big & little dippers and Dal(?)... 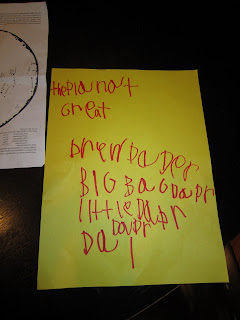 And, finally, in seemingly unrelated news...Tonight, Charlie declared himself "too old for Thomas the Train".  This is a huge deal because Charlie has been OBSESSED with Thomas & Friends since he's been two.  It has been, by far, his favorite thing in the world. It's true that over the last 6 months, he has not played with his trains as often and he hasn't watched the video in quite a while, but tonight was the first time that he has actually said that he is too old for Thomas.
Awwwww...no more "Mom, now we play trains?"  over and over and over again.
While "playing trains" has not always been my favorite thing to do, I'll admit that I'm a little sad that the train stage is officially over.  Wow, just like everyone says, it really does go fast.
I did find it quite amusing that on the same night that Charlie made such a big important proclamation, a few minutes later, he was wearing Cars sunglasses at night and an owl hat to go in the backyard to look at the stars.
That's right Charlie...you are such a cool big boy!  Love it! 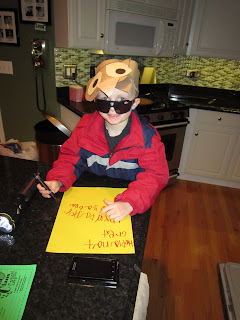 Vegetable Turkey (on the right)
Made by Me and Jack. Don't eat the blueberry eyes, we super-glued them on. 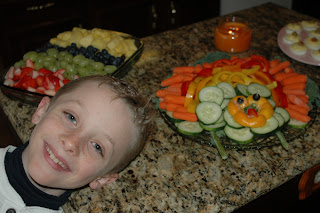 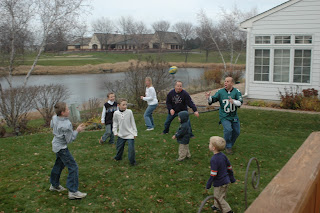 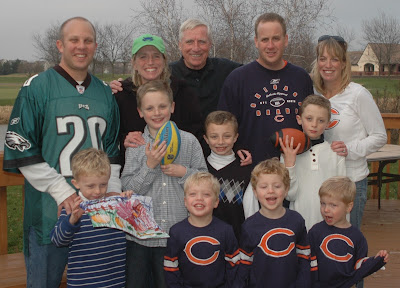 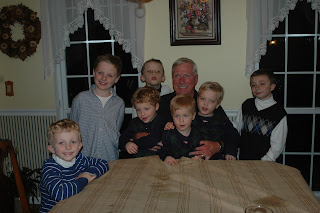 I think this picture will be better in a few years. 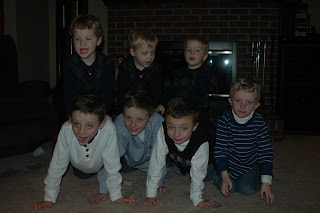 And, in a few years, I think I will be the top of this pyramid.
Cool. 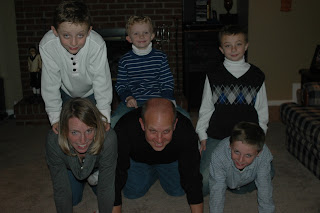 I somehow missed getting a picture of the Grandmas. I guess even if you cook a fabulous Turkey Dinner and do all of the work, you are still not guaranteed a picture on my blog unless you partake in the football game.  You'll have to take my word for it, the Grandmas looked fabulous!

Posted by Kelly at 9:42 PM No comments:
Older Posts Home
Subscribe to: Posts (Atom)
Life is not about waiting for the storm to pass...
It is about learning to dance in the rain.